The Zombie Machete is a Nerf-branded Perpetual Play Group foam weapon that was released in 2013 under the Zombie Strike series.

Like much of the Zombie Strike series, it was originally a Target exclusive in the United States.

The Zombie Machete is a foam weapon designed to resemble a machete. It has a wrappings design on the handle, which are made of the same type of foam as the rest of the weapon. The Zombie Strike logo is featured in the higher middle of the blade.

The Zombie Machete was first revealed at the 2013 San Diego Comic Con. It then began appearing in stores in August of 2013.[1]

It was later renamed to the Foam Machete. After this name change, Perpetual Play Group stopped producing the product, and instead Jazwares started producing it. 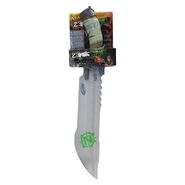 The packaging for the Zombie Machete. 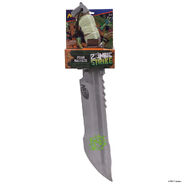 The packaging for the Foam Machete.
Add a photo to this gallery

Retrieved from "https://nerf.fandom.com/wiki/Zombie_Machete?oldid=206694"
Community content is available under CC-BY-SA unless otherwise noted.