The Zombie Fighter 8 Shot is a Humans vs. Zombies-branded blaster that was released in 2011.

The Zombie Fighter 8 Shot features two accessory rails compatible with Nerf tactical rail accessories: one on top and the other on bottom. Its turret rotates counter-clockwise on the prime.

It advertises a firing range of up to twenty feet (seven meters).

The Zombie Fighter 8 Shot was re-released in 2012 under the Air Zone brand as the 8 Shots Blaster. This version came packaged with an ammo rack, scope, a missile launcher, and one missile.

It was re-released again as a Banzai blaster as the Turbo Power Blaster.

The Zombie Fighter 8 Shot has been released with the following color schemes:

The Turbo Power Blaster was released within two blaster sets: the Turbo Battle Pack, comparable to the 8 Shots Blaster release, and the Tag Blast Target Blast, which comes packaged with an electronic target board. 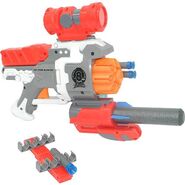 The 8 Darts Blaster, with its accessories. 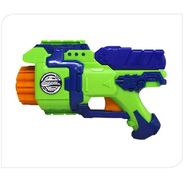 The Banzai Turbo Power Blaster.
Add a photo to this gallery

Retrieved from "https://nerf.fandom.com/wiki/Zombie_Fighter_8_Shot?oldid=189923"
Community content is available under CC-BY-SA unless otherwise noted.