The Zeus MXV-1200 is a Nerf blaster that was released in fall of 2015 under the RIVAL series. It requires six "C" batteries to be operated.[1]

It comes packaged with one twelve round magazine and twelve High-Impact Rounds.

Like most flywheel blasters, the Zeus MXV-1200's acceleration trigger is located directly under the firing trigger.[2]

The Zeus is not compatible with the seven round magazine, as it is too small to be properly seated in the blaster.

The Zeus was officially announced at the 2015 Toy Fair, along with the rest of the RIVAL series.

The Zeus has been released with the following color schemes:

Once the first two gates have been removed in the feeding mechanism, along with some modification to the last gate, the Zeus can be converted to be a fully automatic blaster with a very high rate of fire. This is because, unlike most flywheel blasters, the Zeus does not rely on a pusher mechanism to feed rounds. Rather, it solely relies on the magazine's follower to push rounds into the flywheels, since the horizontal magazine is directly behind the flywheels. The gates are what prevent the follower from pushing all the rounds into the flywheels, allowing the Zeus to retain its semi-automatic firing mode. When removed, the follower will push all the rounds into the flywheels when the trigger is pulled, and only stop when the trigger is not pulled. Doing this also allows the Zeus to fire Mega Darts, as the magazine can hold three Mega Darts that face directly into the flywheel cage. Usually, when done, an additional High Impact Round is loaded in front of the three Mega Darts to hold them in place. 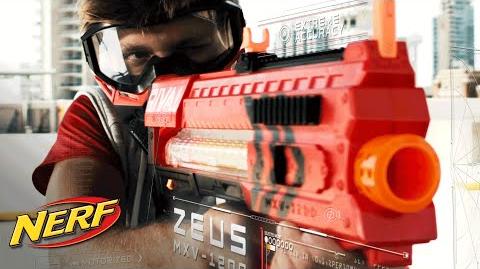 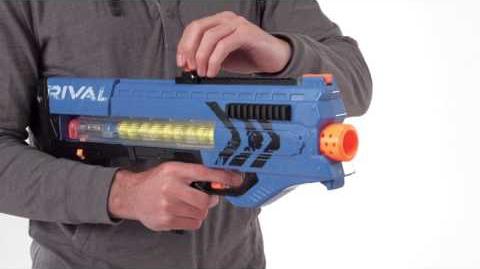