The Zenith is a Buzz Bee blaster that was released in 2017 under the Air Warriors series.

It comes packaged with a flip-up sight and six Precise Pro Darts.

The Zenith is a pump-action blaster with a six dart turret that auto-advances. It features a flip-up sight that can be attached via its tactical rail.

The Zenith was first shown off at the 2017 New York Toy Fair.

A re-release of the Zenith saw its advertised firing range boosted to a hundred feet (thirty meters); it comes packaged with Long Distance Darts, rather than Precise Pro Darts.

The Zenith was given a blaster set as the Thermal Zenith. This release comes packaged with the Thermal Hunter's Heatseeking Scope and a rail adapter accessory instead of the flip-up sight. 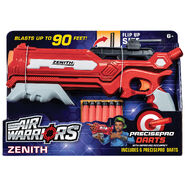 The packaging for the Zenith. 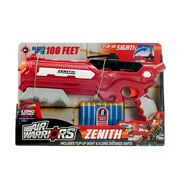 The updated packaging for the Zenith.
Add a photo to this gallery

Retrieved from "https://nerf.fandom.com/wiki/Zenith?oldid=193346"
Community content is available under CC-BY-SA unless otherwise noted.