The Z-Bomb Holster is a Nerf-branded Perpetual Play Group accessory that was released in 2013 under the Zombie Strike series.

It is designed to hold Z-Bombz; up to two can be held in the holster. It can be shut and sealed via Velcro strap in the front. It is very similar in function to the Ammo Bag Kit.

It can also hold other things, such as darts and discs.

It was announced at San Diego Comic Con 2013 along with the rest of the late 2013 and 2014 Zombie Strike line. As the release for this product was unannounced, it is unknown when it officially landed in stores. 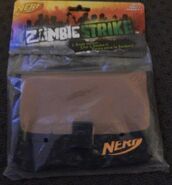 The packaging for the Z-Bomb Holster. 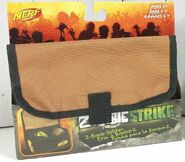 The alternate packaging for the Z-Bomb Holster.

A closed and secured holster.
Add a photo to this gallery
Retrieved from "https://nerf.fandom.com/wiki/Z-Bomb_Holster?oldid=174780"
Community content is available under CC-BY-SA unless otherwise noted.