For information on the blaster's standard features, see Xcess.

The prototype of the Xcess' X-Shot Excel variant had three cylinders instead of two; this is not present on the final version as it still retained its two cylinder configuration, likely due to technical difficulties with the cylinders spinning.

It was released alongside an X-Shot Zombie variant.

An alternate version of the Xcess includes six Practice Target Cans, rather than three.

The packaging for the X-Shot Excel Xcess. 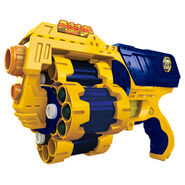 A prototype concept image for the X-Shot Excel Xcess.
Community content is available under CC-BY-SA unless otherwise noted.
Advertisement