The Xcess is an Air Zone blaster that was released in 2012.

It comes packaged in blaster sets and cannot be purchased separately.

The Xcess is a revolver-style blaster with two dart-loading cylinders and a top portion where discs can be loaded. Both types of ammunition are primed and fired from the same priming and firing mechanisms. The top-most cylinder is where darts are fired from; this auto-advances on the prime. Cylinders can be swapped between with manual force.

It is a re-release of the 2012 X-Shot Xcess. It shares a color scheme with the X-Shot Zombie version of the Xcess. 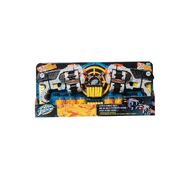 The packaging for the Xcess Double Pack.

The packaging for the Dual Double Xcess Twin Pack.
Community content is available under CC-BY-SA unless otherwise noted.
Advertisement