An XL Distance Dart is a type of Buzz Bee dart that was released in 2015 under the Air Max sub-series.

The XL Distance Dart is a larger dart than the standard Buzz Bee ammunition, the Suction Dart. The dart itself features a regular foam body with a suction cup dart head. International variants of the dart do not feature a suction-cupped dart head though both versions of the dart are compatible with clip system blasters because of the small size of the suction cup. XL Distance Darts are sometimes considered to be of a slightly lesser quality than Hasbro-branded products, though there have not been any conclusive results to prove this.

The XL Distance Dart is the Buzz Bee counterpart to the Nerf Mega Dart. As such, it is cross-compatible with all blasters in the N-Strike Mega series. Because of this, they are also compatible with Nerf Mega Clips as well as the intended Buzz Bee clips, such as the three dart and twelve dart clips.

XL Distance Darts were released under the Air Max series, with the first three compatible blasters being the Baron, Boss and Tyrant, in 2015. Strangely, there have not been any new blasters to use XL Distance Darts since these original three saw release.

The XL Distance Dart has been released with the following color schemes: 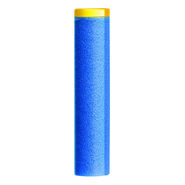 The overseas variant of the XL Distance Dart, featuring a flat head. 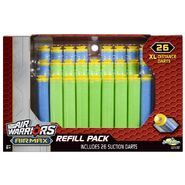 Alternate packaging for the twenty-six dart refill pack.
Add a photo to this gallery

Retrieved from "https://nerf.fandom.com/wiki/XL_Distance_Dart?oldid=189912"
Community content is available under CC-BY-SA unless otherwise noted.