Nerf Wiki
Register
Don't have an account?
Sign In
Advertisement
in: Articles to be split, Article stubs, Prime Time Toys blasters,
and 4 more

The X-70 is a Stats Blast blaster.

The X-70 is a small blaster that lacks a firing trigger. It features a rotating turret and a priming slide that fires the blaster when it is pulled back, similarly to the Lanard Over Under. The turret must be manually advanced before firing the next dart.

It advertises a firing range of up to seventy feet (twenty-two meters).

In 2019, the X-70 was re-released under the Dart Zone brand as the Compact Power Blaster. Similarly to the Stats Blast release, two come packaged in the Commando Iconic 4 blaster set. 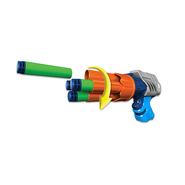 The X-70's rotating turret.
Community content is available under CC-BY-SA unless otherwise noted.