The Wingspeed is a Nerf arrow blaster that was released in spring of 2016 under the Rebelle series.

It comes packaged with two arrows and instructions.

The Wingspeed is a bow with bow arms that flip open when an arrow is notched and ready to be fired. Upon firing, it will collapse in its default, folded position. It has two arrow holders on its underside, on either side of the blaster. 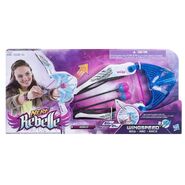 The packaging for the Wingspeed.
Add a photo to this gallery

Retrieved from "https://nerf.fandom.com/wiki/Wingspeed?oldid=189889"
Community content is available under CC-BY-SA unless otherwise noted.