A Whistler Dart is a type of Nerf dart that was released in 2003.

Whistler Darts are variants of the Nerf Micro Dart. The ammo’s signature whistle is created by a small opening in its dart head. This whistle is easier to hear indoors.

The whistling tip can make the dart inaccurate compared to other dart types. If the opening faces upwards when shot, it may improve distance, due to an updraft keeping the dart from dropping.

They feature a firmer dart body and a stronger head, compared to the similar Sonic Micro Dart.

Whistler Darts and Sonic Micro Darts were available during the same period of time. However, Whistler Darts featured a longer shelf life, and would be discontinued in 2011, in favor for the standardized 2012 Elite Dart.

Whistler Darts have been released in the following color schemes: 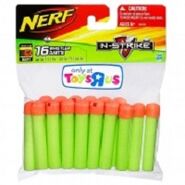 The Sonic Series variant of the Whistler Dart.
Português
Community content is available under CC-BY-SA unless otherwise noted.