For information on the blaster's standard features, see Vulcan EBF-25.

It comes packaged with an ammo box, a tripod, a twenty-five dart belt, and twenty-five Sonic Micro Darts.

It was only available at Walmart for their 2009 Black Friday sale.

Like the other Red Strike series blasters, this blaster is highly coveted by collectors. This could be because of the red color scheme or the fact that they were released and sold only for a specific sale.

To reload the Vulcan, load up to twenty-five darts into its belt. Open the ammo box and Vulcan cover and Load the belt correctly (logo face up) into the blaster. Close both lids in order (ammo box first, then the main firing cover). 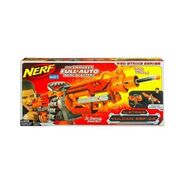