The Vulcan EBF-25, also known as the Havok Fire EBF-25 in Europe, is an electronic belt-fed Nerf blaster that was released in fall of 2008 under the N-Strike series. It requires six "D" batteries to fire automatically.[1]

The Vulcan EBF-25 is a large belt-fed blaster with two firing modes: a battery-operated fully-automatic firing mode, and a manual single-fire firing mode. The latter uses a bolt-action priming mechanism. The belt auto-advances as darts are fired, and collects in the included ammo box, which attaches to the side of the blaster.

The blaster features an large carry handle, not only to assist in carrying it, but to act as a grip for firing it from the hip. An included detachable tripod accessory allows the blaster to also be used stationary on a flat surface, similar to that of a turret. The Vulcan is also compatible with the Rhino-Fire tripod, in lieu of its own.

It advertises a firing rate of up to three darts per second.

Prototypes of the Vulcan were far larger than the final version. This includes the Vulcan BF-50, which was far different from the final version. It notably plugged into a power outlet, rather than being battery-operated; however, according to The Ultimate Nerf Blaster Book, the final version was always intended to have a motorized direct plunger system. It also featured a larger, cylindrical ammo box, known as a "belt drum", which held a fifty dart belt. Initial plans for the blaster also included a rotary barrel that moved as fired, like the Dart Zone Gatling Blaster and Scorpion Gatling Blaster. The Vulcan BF-50 is notable for having shown up at Nerf promotional events.[2]

The Vulcan was announced in early February of 2008. News began to spread around February 13th, after it was discussed on popular forum NerfHaven.[3] There was heavy speculation before pictures were revealed that it was going to be an air system blaster. Pictures were revealed several days later on the 18th of February.[4] Early versions of the Vulcan featured a chrome-colored handle at the top of the blaster, no yellow plates on the tripod, and an orange belt. It also featured more yellow and less grey on the center of the shell.

The Vulcan, in a more complete form, made an appearance at an unknown convention in early June of 2008. The blaster was shown firing roughly between two and seven feet, barely leaving the blaster itself in some cases, leading to disappointment among some fans.[5] This may have simply been due to the fact that this was an early model and not a finished version. Early rumors claimed a release on July 1, 2008.[6]

Shortly after release, the blaster became somewhat of a flagship product for the Nerf brand. It was part of many promotions, one notable one being 2009's Great Dart Giveaway promotion.[7] Rumors of its discontinuation began spreading around September of 2010, however this did not occur.[8]. It was also re-released as a Red Strike blaster, as a 2009 Black Friday Walmart exclusive. Additional re-releases came in 2010, for the Clear Series and Sonic Series.

A newer version of the blaster was released later in its lifespan. The packaging description, which originally read "The Largest Full-Auto Nerf Blaster", was changed to "Full-Auto Belt-Fed Blaster". This newer version of the Vulcan notably has a higher firing range and better reliability.[citation needed] In some countries, stock were cleared out when the N-Strike Elite series was introduced, including Singapore, where Vulcan blasters were cleared out of stores between October and December.[1]

The Vulcan did not make the transition over to the N-Strike Elite line. When Hasbro was asked the status on the Vulcan, they refused to comment, possibly hinting an upcoming re-release.[9] By December of 2013, the Elite Repaint re-release of the Vulcan came out, this time under the international name Havok Fire EBF-25.[10]. This version features identical performance to the N-Strike variant.

The Vulcan was spiritually succeeded by the 2014 N-Strike Elite Rhino-Fire, evident from their high capacities, fully automatic capabilities, and tripod cross-compatibility.

The Vulcan EBF-25 has been released with the following color schemes:

The Vulcan can be modified to have a faster rate of fire, typically by increasing battery voltage. This also comes with the drawback that the motor may overheat and will wear faster from such a modification.

Ammo belts can also be modified by linking multiple belts together infinitely; however, due to bulk reasons, the common modified belts hold a total of fifty darts, made of two standard twenty-five dart belts. The Vulcan's ammo box only holds a twenty-five dart belt with the lid closed; thus with the extended belt mod, the user is forced to either leave the ammo box door open or use the Vulcan without an ammo box entirely. The lack of an ammo box can potentially leave users at the mercy of belt feed errors, as the Vulcan may have a more difficult time feeding the belt on its own as it needs support, particularly near the start and end of any given ammo belt.

One solution is for the user to help feed the belt by holding it up by hand, though this can be uncomfortable, and is still not as reliable as an ammo box may be. Some modders have even circumvented the issue by modding a real military ammo box and attaching it to the Vulcan.

To reload the Vulcan, load up to twenty-five darts into its belt. Open the ammo box and Vulcan cover and load the belt correctly (logo face up) into the blaster. Close both lids in order (ammo box first, then the main firing cover).

For automatic fire, turn on the power button and pull the trigger to fire a dart.

For single fire, turn off the blaster and pull the bolt back and forward all the way. Pull the trigger to fire a dart. 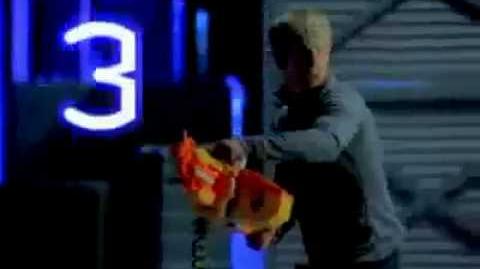 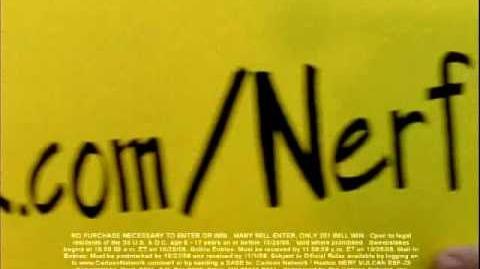 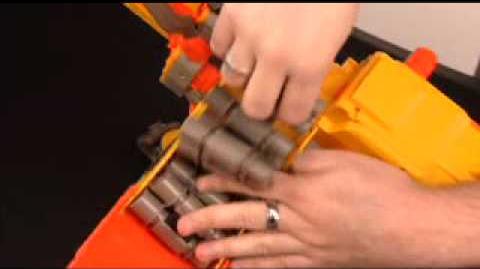