The Vortex Tech Kit is a Nerf accessory kit that was released in 2011 under the Vortex series.

It comes with one ten disc magazine and ten XLR Discs.

This kit was initially discovered as the Vortex Mission Kit[1], which led people to believe it was going to be in similar fashion to the N-Strike Mission Kits. When the final release appeared online, it was under the name Vortex Tech Kit instead.

This was the first non-blaster product to be released under the Vortex series. 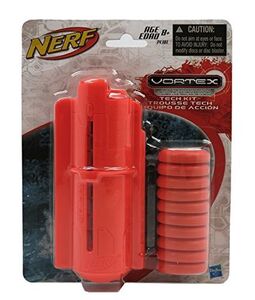 The updated packaging for the Vortex Tech Kit.
Add a photo to this gallery

Retrieved from "https://nerf.fandom.com/wiki/Vortex_Tech_Kit?oldid=189860"
Community content is available under CC-BY-SA unless otherwise noted.