The Villainator is an Adventure Force blaster that was released in August of 2020.

It comes packaged with the Sport Stock 350, forty Super Darts, and instructions.

The Villainator is a pump-action blaster with a removable forty dart drum. Unlike the similar Turbo Advance, which fires one concentric ring of twenty darts before having to switch to the second, the Villainator’s drum is staggered, and fires forty darts uninterrupted by alternating rings automatically. It features slam fire capability, as well as an accessory rail and a flip-up iron sight. The rear iron sight is behind the rail. 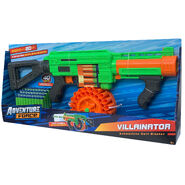 The packaging for the Villainator. 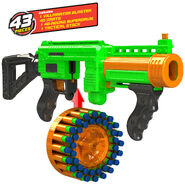 The Villainator and its included drum. 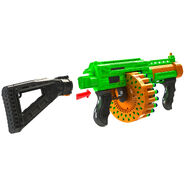 The Villainator and its included detachable shoulder stock.