The Vigilon is a Nerf blaster that was released in 2011 under the Vortex series.

It comes packaged with five XLR Discs and instructions.

The Vigilon features a single tactical rail on top of the blaster. It has two release levers on either side the side of the blaster that open the loading mechanism, which is designed to hold up to five XLR Discs at a time. It also has a set of iron sights on the end of the blaster, as well as a strap point on the handle for a strap, bandolier, or another carrying device.

It is similar to blasters such as Speedload 6 and the Maverick REV-6.

The Vigilon was re-released in a transparent-green color scheme under the Sonic Series in 2012.

It was later re-released under the Vortex VTX series in 2018.

The Vigilon has been released with the following color schemes:

Due to the complex internals of the Vigilon, there are only a few modifications that can be done. It is possible to set the torsion spring to a tighter position or to replace it with a newer, more powerful spring. Another modification that is done somewhat commonly is removing safety features within the blaster. Though not a performance enhancing modification, the ring at the bottom of the handle is a removable, redundant piece.

The Vigilon has so far been released in two value packs: a "Double Your Discs" value pack, which included ten XLR discs, and the Vigilon & Praxis Set. 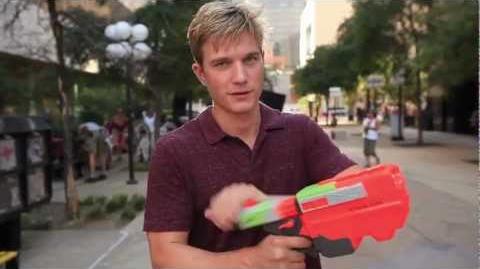 NERF VORTEX Inside Blast - VIGILON
Add a photo to this gallery

Retrieved from "https://nerf.fandom.com/wiki/Vigilon?oldid=190171"
Community content is available under CC-BY-SA unless otherwise noted.