Not to be confused with the older version of the Vigilante.

The Vigilante is an X-Shot blaster that was released in 2018.

The 2018 Vigilante is an upgraded version of the older X-Shot Vigilante. Like its predecessor, it is a pump-action blaster with a break-away function for reloading. It is notably smaller than the original Vigilante, and has upgraded firing performance. However, unlike the original Vigilante, it does not feature multi-fire, it can only single-fire. The integrated shoulder stock received an overhaul, and can be flipped up against the blaster for storage purposes or to reduce bulk; eight extra darts can be stored in this stock. The blaster also features two accessory rails at the top, as well as iron sights at the end of the barrel. 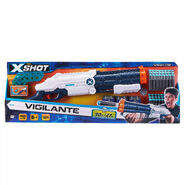 The packaging for the Vigilante. 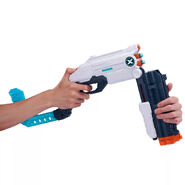 The Vigilante broken up, ready to be reloaded. 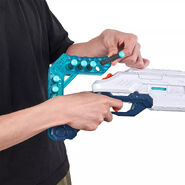 Darts being stored in the Vigilante's stock.