The Venom Shot is a Nerf blaster that was released in 1997 under the Max Force 2112 series.

The Venom Shot is a single-fire blaster designed to look like a spider; when the firing trigger is pulled, the "legs" will move. A unique attribute of this blaster is that its barrel actually doubles as the priming mechanism, an attribute it shares with the Laser Fang. It features a fold-down handle and two dart holders near the end of the blaster. 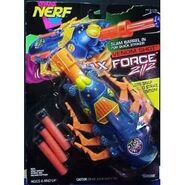 The packaging for the Venom Shot.

The back of the packaging for the Venom Shot.
Add a photo to this gallery

Retrieved from "https://nerf.fandom.com/wiki/Venom_Shot?oldid=189810"
Community content is available under CC-BY-SA unless otherwise noted.