The Vendetta Double Sword is a Nerf weapon that was released in 2011 under the N-Force series.

It comes packaged with two swords that can be attached together to create "one Megablade".

The center of the sword has a buckle like-attachment that joins the two blades together, acting as a part of the handle and as a bumper when these swords are used in a singular fashion. When combined, the sword is over four feet long, making it the longest N-Force weapon to date.

When the swords are separated, one has a clear advantage. While sparring with one sword, one can block incoming darts or add some extra attacks from the side. It can also be used to fight two opponents at a time. When separated, the Vendetta blades are of comparable lengths to standard Escrima sticks. They can be used to execute many Kali maneuvers, such as the sinawali. 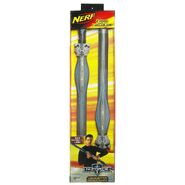 The packaging for the Vendetta Double Sword. 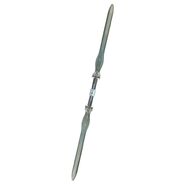 The Vendetta Double Sword in "Mega-blade" mode.
Add a photo to this gallery

Retrieved from "https://nerf.fandom.com/wiki/Vendetta_Double_Sword?oldid=189809"
Community content is available under CC-BY-SA unless otherwise noted.