The Velocity is a Dart Zone blaster that was released in 2018 under the BallistixOps series. It requires six "D" batteries to be operated.

It comes packaged with a forty round hopper, forty Power Strike Rounds, blue and red team indicator panels, and instructions.

The Velocity is a semi-automatic, flywheel-powered, hopper-fed blaster. The blaster features an acceleration trigger below the firing trigger. The hopper feeds from a well at the top. The blaster's sides have removable green panels, which can be swapped out for either red or blue panels instead. These panels are used to indicate the user's team, while the green one is just a default panel. There is a jam door on the right of the blaster. The blaster has a diagonal accessory rail on each side.

The blaster's battery tray is identical to blasters such as the RIVAL Khaos MXVI-4000 and the Nemesis MXVII-10K; their battery trays are completely cross compatible. As such, the Accelerator is also able to use the Rechargeable Battery Pack.

The Velocity is a re-release of the 2018 Adventure Force Tactical Strike Accelerator. 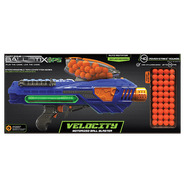 The packaging for the Velocity. 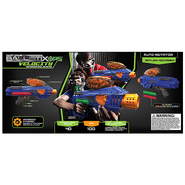 The back of the packaging for the Velocity. 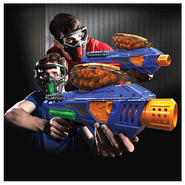