watch 02:45
Wiki Targeted (Games)
Do you like this video?
Play Sound

It comes packaged with six Doomlands Darts and instructions.

The Vagabond is a large blaster capable of slam fire. It is loaded directly by the side of the barrel. It has a bigger hole in the muzzle, likely for reducing the chance of the dart hitting the exit of the blaster. It has one tactical rail on the top of the blaster and two strap points: one below the front of the blaster and one at the end of the handle. Like other Doomlands blasters, the Vagabond has clear plastic parts, which show the firing mechanisms.

It is essentially a reshell of the Guardian Crossbow, as they share the same internals and pump action mechanism.

The packaging for the Vagabond. 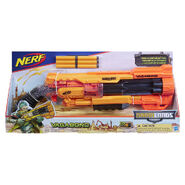 The updated packaging for the Vagabond.
Add a photo to this gallery

Retrieved from "https://nerf.fandom.com/wiki/Vagabond?oldid=208675"
Community content is available under CC-BY-SA unless otherwise noted.