The twelve round magazine is a Nerf magazine that was released in 2015 under the RIVAL series.

It comes packaged with the Zeus MXV-1200, the Atlas XVI-1200, the Hera MXVII-1200, and the Phantom Corps Apollo XV-700. It can also be purchased separately and includes one magazine clips and eighteen High-Impact Rounds.

As its name suggests, the twelve round magazine holds up to twelve High-Impact Rounds at a time. It is loaded from the top, through an orange opening; it can be loaded by manually loading each round into the top or by pressing the magazine down onto rounds on a surface. On the top next to the opening is a button that releases all rounds inside the magazine. Using the magazine clips that come packaged with it when sold separately, it can be attached to a RIVAL tactical rail, which makes it possible to store extra clips on any RIVAL blaster or Battle Case. 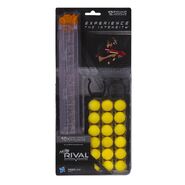 The packaging for the twelve round magazine refill pack.
Add a photo to this gallery

Retrieved from "https://nerf.fandom.com/wiki/Twelve_round_magazine?oldid=189774"
Community content is available under CC-BY-SA unless otherwise noted.