Not to be confused with the older version of the Turbo Fire.

The Turbo Fire is an X-Shot blaster that was released in spring of 2019.

The Turbo Fire is a blaster with an integrated twenty dart drum. It features the use of Nerf-style slam fire. It also features a flip-up sight with an X-Shot-style crosshair, which can be flipped up by pressing a button located just behind it.

It is primed with the top slide; the front grip is cosmetic.

The Turbo Fire was re-released in 2019 into the X-Shot Ninja series as the Turbo Strike. 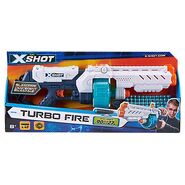 The packaging for the Turbo Fire. 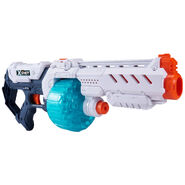 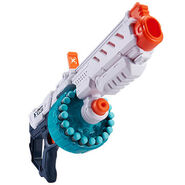