The Turbo 12 is a Buzz Bee blaster that was released in 2011 under the Air Warriors series. It requires three "AA" batteries to be operatd.

The Turbo 12 is a battery-operated flywheel blaster, with an integrated twelve dart drum. It features Power-Lock connectors, which allow it to be attached to other Buzz Bee blasters with them. It has a similar muzzle to that of the Automatic 20 and the Mech 12.

Nerf Elite Darts are not compatible with the Turbo 12 due to their greater length. They may be accommodated with some shell cutting.

The Turbo 12 is available under the Air Blasters series outside of the United States.

The Turbo 12 has been released with the following color schemes: 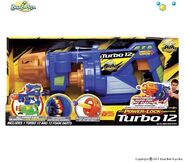 The packaging for the Turbo 12. 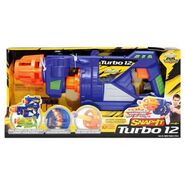 The Air Blasters packaging for the Turbo 12. 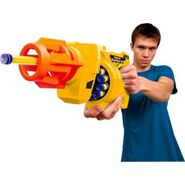 A model firing the Turbo 12.
Add a photo to this gallery

Retrieved from "https://nerf.fandom.com/wiki/Turbo_12?oldid=189768"
Community content is available under CC-BY-SA unless otherwise noted.