The Turbo-Fire is an Air Zone blaster that was released in 2012.

The Turbo Fire 20 Shot is a pump-action blaster with a twenty dart turret. It features an integrated shoulder stock.

It was re-released as the Turbo Fire 20 Shot the same year it came out.

The Turbo-Fire has been released in the following color schemes: 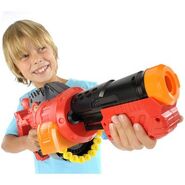 A model aiming the red Turbo-Fire.
Community content is available under CC-BY-SA unless otherwise noted.
Advertisement