The Turbine CS-18 is a Nerf blaster that was released in fall of 2020 under the Elite 2.0 series. It requires four "C" batteries to be operated.

It comes packaged with an eighteen dart clip, thirty-six Elite 2.0 Darts, and instructions.

It is a Walmart exclusive in the United States.[citation needed]

Some blasters have an issue when attempting to fire only one dart at a time. This can cause the blaster to fire off bursts of two to six darts, instead.[citation needed] Similarly, the clip release button can be stiff, depending on the blaster, due to the use of a plastic spring rather than a metal spring.

It cannot reliably feed Super Darts, despite using a similar pusher arm as the RapidStrike CS-18, which has little problems with them.[citation needed]

The Turbine's included clip is prone to jamming and causing problems.[citation needed]

The Turbine was first leaked alongside the rest of Elite 2.0 in early 2020 via online, imageless listings. Later that year, pictures of it would surface. 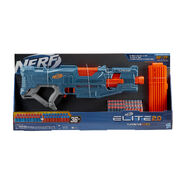 The packaging for the Turbine. 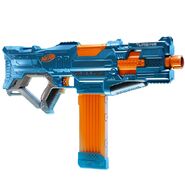 A 3D render of the Turbine. 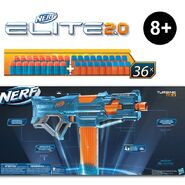 The back of the packaging for the Turbine.