Not to be confused with the Rebelle blaster of similar name or the N-Strike Modulus Regulator.

The Trilogy DS-15 is a dart shell Nerf blaster that was released in fall of 2019 under the N-Strike Elite series.

The Trilogy is a shell-fed, pump-action blaster similar to the Zombie Strike SledgeFire. Shells are loaded into the blaster through a top porthole, which opens when the blaster is half-primed. Spent shells will auto-eject out of the right side of the blaster, to make way for a fresh one to be loaded in.

The blaster features an integrated shoulder stock, where five additional shells can be stored. On the left side of the blaster, next to the firing trigger, is an unjamming button. When held down, it will allow the blaster to be primed, for the sake of clearing dart or shell jams.

There is one short tactical rail above the muzzle. Three sling points are located on the blaster: two at the top and one below the muzzle.

The Trilogy is not compatible with SledgeFire shells.

The Trilogy was shown off at the 2019 Toy Fair. An official announcement regarding the Trilogy was given at 2019's Jared's Epic NERF Battle event.[1] 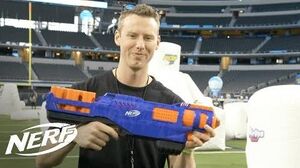