The Trilogy is a Nerf blaster that was released in fall of 2016 under the Rebelle series.

The Trilogy is essentially a re-release of the N-Strike Elite Triad EX-3. It holds up to three darts at a time and uses an intelligent air restrictor that allows a single dart to be loaded and fired from any barrel.

The Trilogy was first announced at the 2016 Toy Fair. 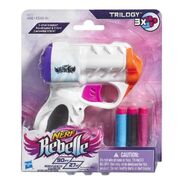 The packaging for the Trilogy.
Add a photo to this gallery

Retrieved from "https://nerf.fandom.com/wiki/Trilogy?oldid=196435"
Community content is available under CC-BY-SA unless otherwise noted.