The Triad EX-3 is an external mechanism Nerf blaster that was released in 2013 under the N-Strike Elite series.

The Triad EX-3 is a direct-prime-action blaster able to hold up to three darts at a time in its three triangularly-placed barrels. It features the use of intelligent air restrictors, allowing a single dart to fire out of either of the three barrels. When all three barrels are loaded, the blaster will fire clockwise starting from the bottom barrel.

A small set of iron sights is located on top of the blaster.

Streamline Darts do not work with the Triad.[citation needed]

Due to how the air restrictors work in the Triad, loading darts in can cause others to pop out.[citation needed]

Though this blaster was originally thought to be a successor to the Jolt EX-1, as they both use the same number code, the Triad is almost twice as big.

It was re-released with Elite XD internals with a white, grey, and black color scheme; this re-release was shown off at the 2014 New York Toy Fair.

The Triad has been released with the following color schemes:

There is a special value pack of the Triad, which includes four blasters and twelve Elite Darts.[citation needed] 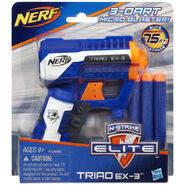 The packaging for the Triad EX-3.