The Tracker ECS-10 is a electronic clip system Nerf blaster that was released in fall of 2019 under the N-Strike Modulus series. It requires four "AA" batteries to be operated.

It comes packaged with a Distance Scope, a Storage Stock, a barrel extension, a banana clip, and twenty Elite Darts.

The Tracker ECS-10 is essentially a re-release of the Modulus ECS-10 with a green camouflage pattern. It is a semi-automatic, clip-fed blaster. It features five tactical rails, a barrel extension point and a detachable shoulder stock attachment point.

The attachments that the Tracker comes with are all repainted variants of previous attachments, for instance the Tracker's stock comes from the 2017 Regulator.

An image for the Tracker was first found as a German listing on the Smyths Toys website, and later posted to Reddit. 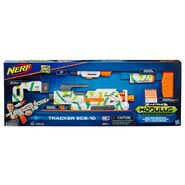 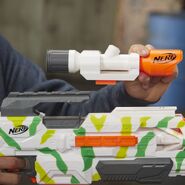 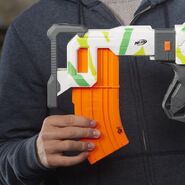 The Tracker ECS-10's Storage Stock being loaded with a banana clip.
Add a photo to this gallery

Retrieved from "https://nerf.fandom.com/wiki/Tracker_ECS-10?oldid=189747"
Community content is available under CC-BY-SA unless otherwise noted.