The Titanium is an Adventure Force blaster that was released in 2017 under the Tactical Strike series.

It comes packaged with an eight round hopper, eight Tactical Strike Rounds, blue and red team indicator panels, and instructions.

The Titanium is a pump-action, hopper-fed blaster. It is also compatible with Nerf RIVAL High-Impact Rounds and magazines. There is a cross-bolt style safety button in front of the trigger that prevents the firing trigger from being pulled when on.

The Titanium has been released with the following color schemes:

The blue variant of the Titanium. 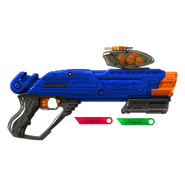 A render of the blue variant of the Titanium with its indicator panels.
Add a photo to this gallery

Retrieved from "https://nerf.fandom.com/wiki/Titanium?oldid=189699"
Community content is available under CC-BY-SA unless otherwise noted.