The Titan is a Dart Zone blaster that was released in 2018. It requires six "AA" batteries to be operated.

The Titan is a fully-automatic belt-fed flywheel blaster. It does not feature a breech lid, and is instead loaded by simply inserting one end of the belt through the feeding area. A power switch is located under the battery tray door, on the left side of the blaster.

It features an accessory rail, which is compatible with Nerf tactical rail accessories.

It advertises a firing range of up to ninety feet (twenty-seven meters) and a rate of fire of three darts per second.

The Titan is a re-release of the 2017 Adventure Force Light Command, sans its built-in LED lights. 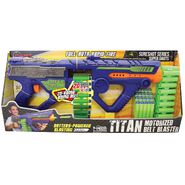 The packaging for the Titan. 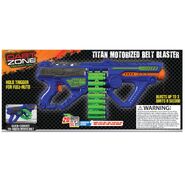 The back of the packaging for the Titan. 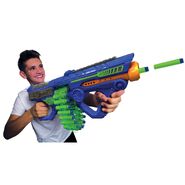 A model aiming the Titan.