The thirty round drum is a cancelled Nerf High-Impact Round drum[1] that would have been released under the Edge Series sub-series.

It would have come packaged with the Helios XVIII-700.

The thirty round drum can hold up to thirty High-Impact Rounds at a time. It would have been the first high-impact round drum. Due to its size, it may only be compatible with the Helios XVIII-700, the Hera MXVII-1200, the Apollo XV-700, and the Finisher XX-700. Due to the High-Impact Round's spherical shape, the drum can store rounds effectively and compactly in a helical configuration, unlike dart drums. Its follower is made of linked spheres of similar size to High-Impact Rounds, to accommodate the drum's spiral shape.

It was originally leaked with the leak of the Edge Series Helios in winter of 2018.

It has made it into the hands of some Nerfers, however its production was cancelled with the Helios due to feeding issues. 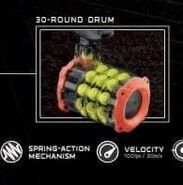 The front of the Helios' drum.