The Thermal Hunter is a Buzz Bee blaster that was released in 2017 under the Air Warriors series.

It comes packaged with a Heatseeking Scope, a detachable shoulder stock, a ten dart clip, and twenty Precise Pro Darts.

The Thermal Hunter is a clip-fed blaster. It features a tactical rail for attaching its included Heatseeking Scope, as well as an iron sight above the muzzle.

The Thermal Hunter was shown off at the 2017 New York Toy Fair.

It was later re-released as the Interceptor, with a blue color scheme and boosted performance. However, the Interceptor does not feature the Heatseeking Scope. 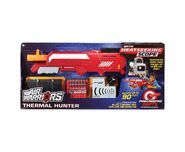 The packaging for the Thermal Hunter.