For the Lanard Huntsman blaster of the same name, see The Judge (Lanard).

The Judge is a Nerf blaster that was released in August of 2017 under the Doomlands 2169 series.

The Judge is a large blaster that fires three darts per shot.[1] It features a large rotating drum that holds thirty darts, which are separated into ten groups of three; this drum comes disassembled in the packaging. It features a single tactical rail above its rotating barrel and two strap points: one on the back of the blaster and one built into its handle. Like other Doomlands blasters, it has a clear plastic window showing off the internals.

To assemble The Judge, slide in a four-shot drum section, then turn the drum clockwise three clicks. Repeat the process with the other three-shot drum sections. The attach the drum's shells on either side of the blaster. 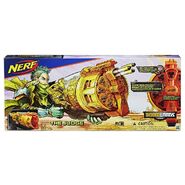 The packaging for The Judge. 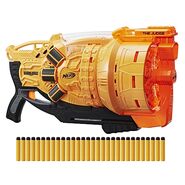 The Judge and its contents. 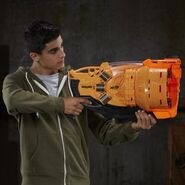 A Nerf model holding The Judge. 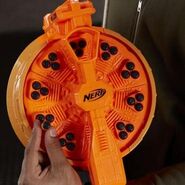 The Judge being loaded.
Add a photo to this gallery

Retrieved from "https://nerf.fandom.com/wiki/The_Judge_(Nerf)?oldid=196585"
Community content is available under CC-BY-SA unless otherwise noted.