The Tetra-Strike is a Buzz Bee blaster that was released in 2010 under the Air Blasters series.

The Tetra-Strike is a semi-automatic blaster that features the use of a multi-step firing trigger, which allows a single dart to be fired at once or all four darts at once, depending on how far back the trigger is pulled. It takes approximately eight to nine pumps to fully fill the blaster's four air tanks, due to the blaster's very small pump draw length.[1]

The blaster itself has a small handle and has no visible iron sights or guiding mechanisms. It is also quite thin, especially when compared to rivaling air-powered blasters. It fires the top dart first, and moves down to the bottom in both modes.[1] Despite coming with six darts, no dart holders apart from the barrels exist on the blaster itself.

The Tetra-Strike was one of the earliest Buzz Bee blasters to have universal acclaim from fans, due to its simplicity, ease of modifications and stock performance.

It was re-released under the Air Warriors line in 2011. It was carried over to the Air Zone brand with no changes to its name or performance.

Although it has been removed from Buzz Bee's website, it is still available for purchase in some areas.

The Tetra-Strike has been released with the following color schemes:

There are two areas on the Tetra-Strike which are glued into place, which need to be pried apart if one wants to get access to the blaster's internals.

To reload the Tetra-Strike, insert four darts into the front barrels of the blaster. The darts cannot fit all the way into the blaster and will protrude out somewhat. Pump the blaster eight to nine times to fully prime it. 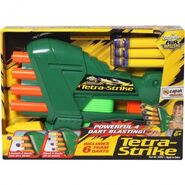 The Air Blasters packaging for the Tetra-Strike.

The Air Warriors packaging for the Tetra-Strike.

The Air Zone packaging for the blue Tetra-Strike.
Add a photo to this gallery

Retrieved from "https://nerf.fandom.com/wiki/Tetra-Strike?oldid=189670"
Community content is available under CC-BY-SA unless otherwise noted.