The TerraScout Recon is a Nerf product that was released in 2017 under the N-Strike Elite series. It requires four "AA" batteries to be operated.

It comes packaged with the drone itself, its remote, a rechargeable battery and charger, a thirty-five dart drum, and thirty-five Elite Darts.

The TerraScout Recon is a fully-automatic, clip system, remote controlled, blaster-like drone that has the ability to fire darts. It comes packaged with a 720p video camera, which can be equipped and viewed through the remote on an integrated LCD screen; this can be doubled as a portable aiming device. It has two tactical rails: one on its built-in handle and one below the muzzle. It is also compatible with barrel extensions.

The TerraScout is all-terrain (except for wet conditions) and can be used indoors and outdoors. It features four switchable channels, allowing for multiple TerraScout units to work at the same time.

Some clip sizes may be too long or too heavy for the TerraScout and may cause movement problems (mainly due to angling upwards or downwards for firing, or the exposed clip bumping into furniture indoors).

The TerraScout Recon is a re-release of the 2016 TerraScout. 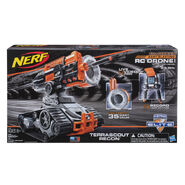 The packaging for the TerraScout Recon.

The remote control for the TerraScout.
Add a photo to this gallery
Retrieved from "https://nerf.fandom.com/wiki/TerraScout_Recon?oldid=197745"
Community content is available under CC-BY-SA unless otherwise noted.