Not to be confused with the original Tek Ten.

The Tek Ten is a Buzz Bee blaster that was released in 2006 under the Ruff Stuff Air Blasters series.

The Tek Ten is a blaster with a ten-dart turret. Pulling the top priming slide auto-advances the turret.

The Tek Ten is a re-release of the 2003 blaster of the same name.

It was re-released in 2008 into the Air Blasters series; a later rename gave it its more commonly used name: Tek 10. It would also be merged into the 2010 Air Warriors series.

The Tek Ten was re-released multiple times into other series and brands. This includes the 2007 LEGO Toa Mahri Dart Blaster and the Air Zone Tek 10, as well as updates in the form of the 2010 Ultimate Blasters Ultimate Tek 10. The Ultra-Tek Protector used the name "Tek 10" in its international releases.

The Tek Ten has been released with the following color schemes: 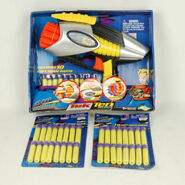 The packaging for the Tek Ten.

The Air Blasters packaging for the Tek 10.

The Air Warriors packaging for the Tek 10.
Add a photo to this gallery
Retrieved from "https://nerf.fandom.com/wiki/Tek_Ten_(2006)?oldid=193792"
Community content is available under CC-BY-SA unless otherwise noted.