The Tek 5 is a Buzz Bee dart blaster that was released in 2013 under the Air Warriors series.

The Tek 5 is a revolver-style with a cylinder capable of holding up to five darts. It is incredibly similar to that of the Nerf N-Strike Maverick REV-6 and Spectre REV-5 in both appearance and function.

The blaster's priming handle has a grip for several fingers to be placed on top of. It also features a drop-out cylinder similar to that of the Maverick's. This cylinder can fold out with the use of the drop release button on the side of the blaster. It cannot be opened without prying off the light green pieces on the handle, which prevent the blaster from being normally opened.[1]

The Tek 5 has been released in the following color schemes:

The packaging for the Tek 5.

The packaging for the lime green Tek 5. 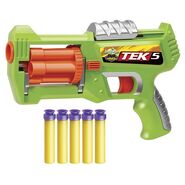