Not to be confused with the Dart Zone Talon.

The Talon is a Nerf blaster that was released in 2020 under the AccuStrike Series.

The Talon is a single-shot blaster that functions in an identical fashion to the BigShock, as they both have a priming slide located in the grip and a firing capacity of one dart.

There are two locations to store Mega AccuStrike Darts. One can be stored on top, while the other can be stored diagonally on the Talon's built-in grip guard on the bottom.

The Talon was first leaked online in mid-2019. Later in late August of the same year, images were leaked of the Talon, as well as the RIVAL Knockout XX-100 and Roundhouse XX-1500. 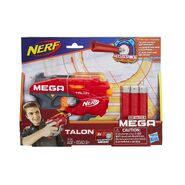 The packaging for the Talon.

An earlier version of the back of the packaging for the Talon, listing that it comes with five Mega AccuStrike Darts.
Add a photo to this gallery

Retrieved from "https://nerf.fandom.com/wiki/Talon_(Nerf)?oldid=207082"
Community content is available under CC-BY-SA unless otherwise noted.