The Tactical Vest is a Nerf-branded Jazwares accessory that was released in summer of 2017 under the RIVAL series.

The Tactical Vest is used to store magazines and High-Impact Rounds, much like the original RIVAL Tactical Vest; it is advertised as being able to hold up to four twelve round magazines and over 150 rounds at once. It has an interchangeable Velcro "team indicator" for either Team Red or Team Blue, as well as Velcro "life indicators" for use during Nerf wars. 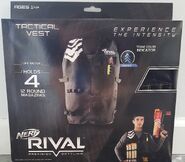 The packaging for the Tactical Vest.

A Nerf model wearing a Tactical Vest, posing with an Artemis XVII-3000.
Add a photo to this gallery
Retrieved from "https://nerf.fandom.com/wiki/Tactical_Vest_(2017)?oldid=197709"
Community content is available under CC-BY-SA unless otherwise noted.