The Switch Shot EX-3 is an external mechanism Nerf blaster that was released in 2008 under the N-Strike series.

It comes packaged with the Nintendo Wii video games Nerf N-Strike or Nerf N-Strike Elite; it can also be purchased separately from the games.

It comes packaged with either three Sonic Micro Darts or three Whistler Darts; this is up to the user's choice. The Nerf N-Strike Elite version additionally comes with a Red Reveal accessory.

The Switch Shot EX-3 is a single-fire blaster. It doubles as a controller for use with the Wii Remote. On the left side is a small orange button which allows the blaster's top half to be removed, which contains its internals. This frees up space to load a Wii Remote inside. Pulling the Switch Shot's firing trigger will actuate the controller's B button, making it a potential controller with not only the Nerf Wii games, but other games with a similar control scheme. The rest of the buttons are exposed, allowing them to be pressed as well. When in controller mode, the back of the blaster is exposed, providing space to attach a Wii Nunchuk to the controller as well.

There is a tactical rail located underneath the blaster.

The Switch Shot has been released with the following color schemes: 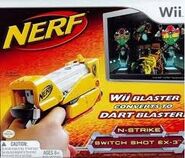 The packaging for the Nerf N-Strike Switch Shot EX-3. 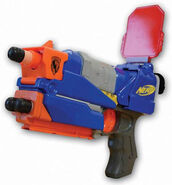 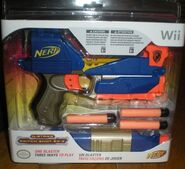 The packaging for the Nerf N-Strike Elite Switch Shot EX-3. 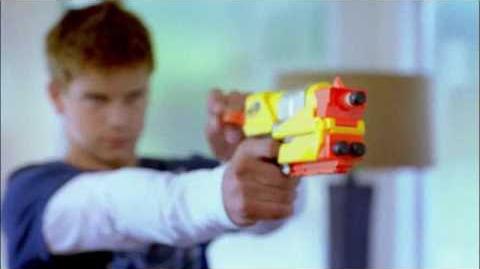