The Swarmfire is a Nerf blaster that was released in 2011 under the Dart Tag series. It requires six "C" batteries to be operated.

The Swarmfire is a motorized dart blaster that is capable of holding up to twenty darts in its front turret. Like the remainder of the 2011 Dart Tag line, its shell comes in many different pieces and layers and it lacks a tactical rail. It has a detachable shoulder stock similar to the LongStrike CS-6's integrated stock, although the stock of the Swarmfire is easily unlocked while the LongStrike's stock is not meant to be removed without shell disassembly.

The Swarmfire was known as the Dart Tag 20 before its official announcement and its release.[2] It was the first 2011 Dart Tag blaster to be revealed.

Like the Sharp Shot and Speedload 6, the Swarmfire was re-released in 2012 with a blue trigger and stronger internals. The 2012 Speedswarm is very similar to this blaster, and is in many ways a minimized variant of the Swarmfire, with the notable difference being the limited capacity of ten darts.

The packaging for the Swarmfire. 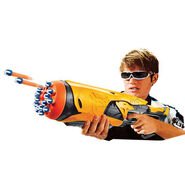 A Nerf model firing the Swarmfire.

The Swarmfire with an orange trigger.

The 2012 packaging for the Swarmfire.