The Surge 6 is a Buzz Bee dart blaster that was released in 2011 under the Air Warriors series.

The Surge 6 features the use of Power-Lock connectors, which allows blasters to be attached to the bottom or top of it. It was the smaller version of the Surge 10, which it was available with in a two-pack. The two blasters share this connection the same way the Tek 6 and the Tek 10 do. This is mostly due to the fact that both are heavily based off of their respective Tek counterparts.

It is essentially a larger Tek 6 with a back priming lever, since both blasters have very similar internal setups.

The Surge 6 was released in 2011 under the Air Warriors series, although the blaster was sold under the Air Blasters series instead in certain countries.

The Surge 6 has been released with the following color schemes: 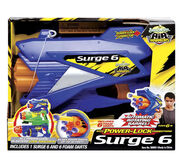 The Air Warriors packaging for the Surge 6. 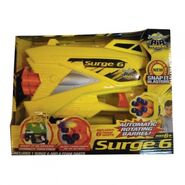 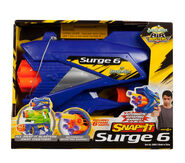 The Air Blasters packaging for the Surge 6.

The packaging for the Surge 6 and Surge 10 blaster set.
Add a photo to this gallery

Retrieved from "https://nerf.fandom.com/wiki/Surge_6?oldid=189558"
Community content is available under CC-BY-SA unless otherwise noted.