The Surge 10 is a Buzz Bee dart blaster that was released in 2011 under the Air Warriors series.

The Surge 10 features the use of Power-Lock connectors that allow blasters to be attached to the top or bottom of it. It was the larger version of the Surge 6, which it was available with in a two-pack. The two blasters share this connection the same way the Tek 6 and the Tek 10 do. This is mostly due to the fact that both are heavily based off of their respective Tek counterparts.

It is essentially a larger version of a Tek 10 with a shotgun pump, as both blasters have very similar internal setups.

The Surge 10 is sold under the Air Blasters series instead in certain countries. 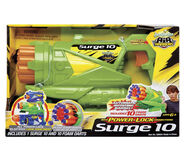 The Air Warriors packaging for the Surge 10. 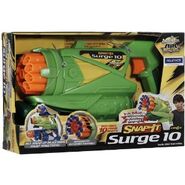 The Air Blasters packaging for the Surge 10.

The packaging for the Surge 6 and Surge 10 blaster set.
Add a photo to this gallery

Retrieved from "https://nerf.fandom.com/wiki/Surge_10?oldid=189557"
Community content is available under CC-BY-SA unless otherwise noted.