The SurgeFire is a Nerf blaster that was released in the spring of 2018 under the N-Strike Elite series.

The SurgeFire is a pump-action blaster that features a fifteen dart capacity rotating drum. It bears a resemblance to the 2015 N-Strike Mega RotoFury, with its main differences being that it fires Elite Darts and has a larger capacity. It also bears slight resemblance to the 2009 Dart Tag Furyfire.

Like the RotoFury, the SurgeFire features the ability to slam fire.[1]

The SurgeFire was leaked in summer 2017, alongside the Mediator.[2] It was then announced at Hascon 2017.

The blaster was given a soft release in Malaysia sometime in November.[3]

Removing the SurgeFire's drum is difficult, but not impossible. There is a hole at the front of the drum housing that can be used to remove the drum, by sticking a rod into it and pushing the drum out. However, there is little point to doing this, as attempting to insert a fully loaded drum into the SurgeFire results in the dart tips not fitting through the drum well. It could possibly be used as a way to insert higher capacity drums made via 3D printing or aftermarket. However, doing this would require said high-capacity aftermarket drum to be equal or less than the dimensions of the original, or else it will not fit in the shell of the blaster.[4] 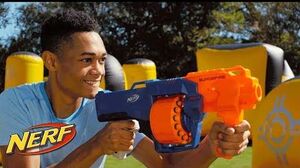