The SuperMAXX 250 is a Nerf blaster that was released in 1998 under the SuperMAXX series.

The SuperMAXX 250 features now-infamous "prong" barrels, on which darts must be slid onto. It is one of the few blasters in the SuperMAXX series not to be powered using an air pressure system; instead, this blaster is spring-powered. The blaster features a small iron sight on the top of the priming handle, and a guide on the front of the blaster.

It is essentially an upgraded version of the 1994 Hyper Rip Rockets Rocketstorm that gave the blaster a trigger and an automatically rotating turret.

It was succeeded by its nearly identical brother, the SuperMAXX 350. This version was little more than a cosmetic change, as performance was relatively the same.

Sometime after initial release, the "SuperMAXX" portion of its title was dropped on some boxes, giving the blaster the new title of 250 Dart Blaster; likewise, the packaging for this re-release had no mention of the SuperMAXX series and instead had a similar packaging style to the Nerf Action series.

This blaster was succeeded in 2002 by the final model to use the prong-style barrels, the Air Tech 1000. 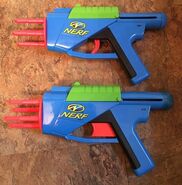 A comparison of the two different trigger types.

The SuperMAXX 250's internals.
Add a photo to this gallery
Retrieved from "https://nerf.fandom.com/wiki/SuperMAXX_250?oldid=189528"
Community content is available under CC-BY-SA unless otherwise noted.