The Stryker is a Dart Zone blaster that was released in 2021 under the Dart Zone Max series.

It is a Target exclusive.[1]

It has a Picatinny rail on top, where the included sights or scope are meant to be attached.

It advertises a firing range of up to 125 feet (thirty-eight meters).

The Stryker was leaked in early 2021, and was originally believed to be a re-release of the Nexus Pro. The blaster was announced by Prime Time Toys in May of 2021.[1] 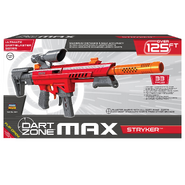 The packaging for the Stryker. 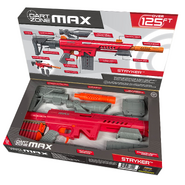