The Stryfe CQ-10 is a close quarters Nerf blaster that was released in 2018 under the N-Strike Elite series.

It comes packaged with a detachable shoulder stock, a Proximity Barrel, a Folding Grip, a banana clip, ten Elite Darts, and instructions.

This blaster is sold exclusively in Europe.

The Stryfe CQ-10 is a battery-operated semi-automatic clip system blaster. It has two tactical rails and two strap points, and is compatible with barrel extensions and detachable shoulder stocks.

It advertises a firing range of up to eighty-eight feet (twenty-seven meters). 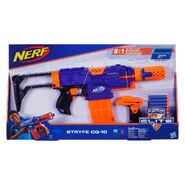 The packaging for the Stryfe CQ-10.
Community content is available under CC-BY-SA unless otherwise noted.
Advertisement