3-4 darts per second
This is an article about the N-Strike Modulus Stryfe. For other uses, see Stryfe.

The Stryfe is a Nerf blaster that was released in 2017 under the N-Strike Modulus series. It requires four "AA" batteries to be operated.

It comes packaged with a barrel extension, a Drop Grip, a six dart clip, six Elite Darts, and instructions.

It is an Amazon exclusive.

The Stryfe is a semi-automatic clip system flywheel blaster. It features compatibility with detachable shoulder stocks and barrel extensions.

It has two tactical rails, one on top and one below the barrel.

It is a re-release of the N-Strike Elite Stryfe.

In 2021, the Stryfe was re-released with slight changes, including a modified color scheme and an updated locking tooth on its tactical rails.

The Stryfe has been released with the following color schemes:

Older versions of the Modulus Stryfe have an issue with their thermistor where if the user rapid-fires for too long, the blaster will shut itself off.[citation needed] This issue is not present on any other version of the Stryfe, and it is unknown why the problem exists with this version specifically. The issue is fixed in newer Modulus Stryfes. 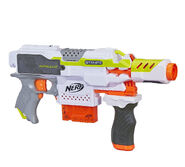 The left side of the 2017 Modulus Stryfe.

The left side of the 2021 Modulus Stryfe.